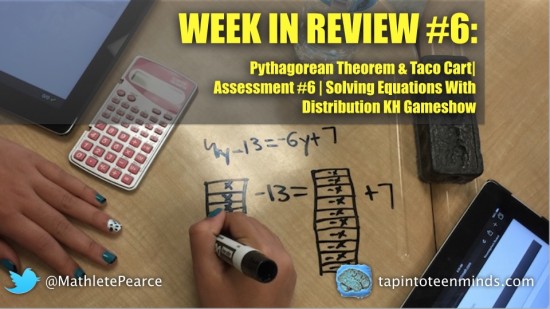 The semester is flying by and I’m really happy with the progress students are making in their mathematical thinking, communication, and confidence. I was especially pleased this week when a student who had very low levels of confidence and was not engaging in the work, began taking risks by participating and both his confidence and understanding are on the rise.

Here’s a quick glance at what we covered this week.

This week, Canada celebrates Thanksgiving and thus there is no school on Monday October 12th.

This week, I wanted to circle back to some measurement concepts. Since we had tackled some area and perimeter of composite figures, I thought it might be a good idea to tackle some concepts related to the slide lengths of right-angle triangles. In the Grade 9 Academic (MPM1D) course, there are two specific expectations related to Pythagorean Theorem:

However, before I dove into the Pythagorean Theorem, I thought it was worthwhile to warm-up with a couple linear equations involving distribution for students to try. 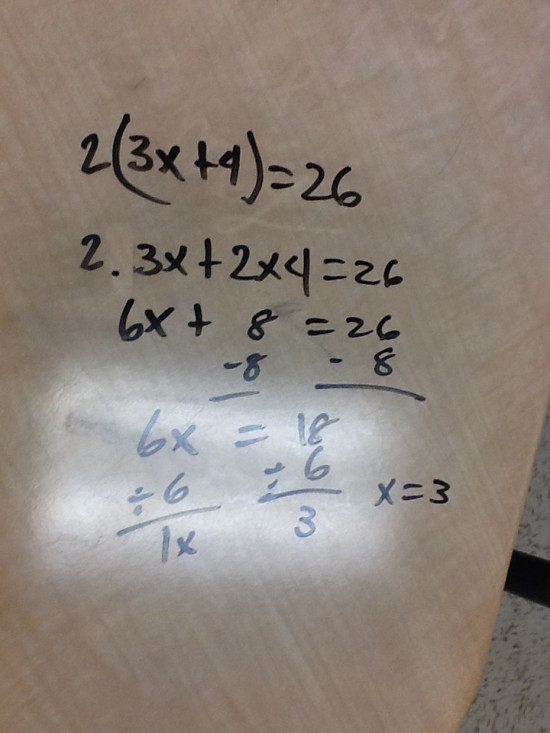 When it comes to Pythagorean Theorem, I often look to Dan Meyer’s Taco Cart 3 Act Math Task as a great place to begin. Since students have experienced Pythagorean Theorem in elementary school, I typically dive straight into the task. For those who haven’t come across the Taco Cart Task, here’s the Act 1 video:

It’s great to let students have a quick discussion in their groups to try and predict who will get to the taco cart first; me or Ben. After sharing out predictions as a class, I want them to dive in so I give them some important details: 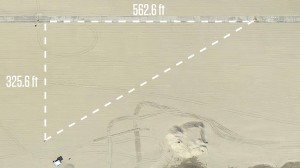 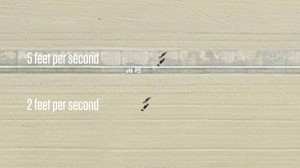 Something important to note is that I haven’t done any pre-teaching here. I haven’t hinted that Pythagorean Theorem can be used or even that they have tackled problems like this before in elementary. I just want to walk around the room and listen in on some discussion to see if any of that prior knowledge comes back. It didn’t take long before I saw a few students writing the formula for Pythagorean Theorem on their desk, while others were Googling terms like: “how do you find the side of a right angle triangle?”

I was surprised to see that some students remembered the geometric representation and began drawing squares to represent a-squared, b-squared and c-squared. All good stuff.

After some students were off and at it, while a few others were struggling to find a place to start, I decided to show them a couple animations and discuss some of what they may (or may not) remember from the past.

The first animation demonstrates the geometric relationship of the Pythagorean Theorem using a right angle triangle with leg lengths of 3 units and 4 units to find the length of the hypotenuse:

The second animation demonstrates a visual of a more generalized situation:

Finally, the third animation attempts to make a clear connection between the geometric and the algebraic representations:

Now, everyone was off and we had some fun using Knowledgehook Gameshow as a way for students to interact with the entire group throughout the problem. 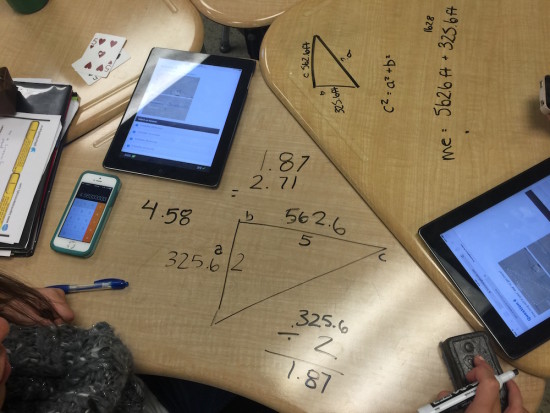 Even though I have an iTunes U Course with a multi-touch book for iBooks that uncovers the Pythagorean Theorem through the Taco Cart 3 act math task, I chose to try a new way to introduce the problem via Gameshow. I’ve had much success with this task using the iTunes U Course and multi-touch book, but found that it was more difficult to tie it all together and make it a collaborative experience. Gameshow seems to fill that gap to allow students to truly collaborate with their peers not just in their groups, but with the entire class.

Here’s the Knowledgehook Custom Gameshow that I created for Taco Cart including some consolidation questions for students to practice their skills:

I know I’ve mentioned it before, but I think it is worth mentioning again that Gameshow allows students to upload photos of their work. So not only do we have an interactive way for students to engage in math class, but we can encourage students communicating their thinking so we can share it with the class and look at it later: 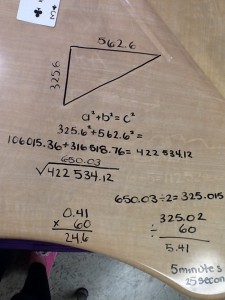 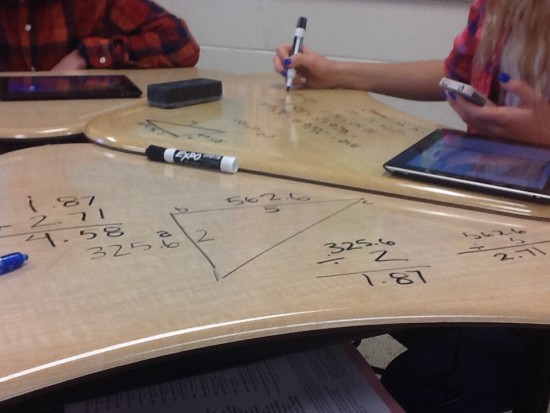 I should also note that you can grab the Taco Cart multi-touch book as well as a ton of other tasks by enrolling in the Curious Math iTunes U Course that I created in collaboration with Jon Orr:

Assessment #5 – A Focus on Solving Equations

I decided to move our assessment day to Wednesday because we had Monday off for Canadian Thanksgiving. This week had a heavy focus on solving equations, so we tackled the following learning goals:

Even though we have been working with equations quite a bit over the past week, I was surprised at how many struggled with solving equations when variable terms were on both sides. Distribution also caused some issues that I clearly had not anticipated based on how students performed when we first worked with the problems. This would be a major concern back when I taught with a unit based approach; once you finish the unit, that’s it! But now that I’ve been spiralling the content and don’t feel so restricted by going really deep into a new concept over a short period of time, I can continue to bring back these concepts and not fear that I’m going to run out of time. For example, I used to teach solving equations as a complete unit. We would start by solving 1-step equations, then move on to two-step and multi-step equations. Then, we would solve equations that involve distribution. Finally, we would solve equations involving fractions. That can be intimidating and possibly too much to handle for some students. Now, we work on some one- and two-step equations, branch off to something else, then come back and move into some more difficult equations. Overall, I must say that I’m loving how my first time spiralling through grade 9 academic (MPM1D) is coming together.

Get the assessment below:

After some apparent struggles with distribution and most students using trial and error as the only approach for the last question on Assessment #5, I thought it was worth taking a closer look as a group. I’ve always despised taking up assessments because I always feel like I’m doing all of the work and the students I’m trying to take up the assessment for are typically disinterested. Regardless, I gave it a go. The results were similar to what I expected, which means I should probably consider taking up the assessment using another strategy. Maybe next time I could have students work on it in groups and present their solutions? However, the last question would probably need some help getting them started so that they would consider exploring other options besides trial and error. (I should note that trial and error isn’t bad, but I do want them to see that they could get there by solving the equation).

The remainder of class was used to get some more practice in on those pesky equations involving distribution and other multi-step equations involving variable terms on both sides. I have been really pushing students to draw out what the equation “looks like” so they can get a better intuitive sense as to what they need to do to isolate the variable. 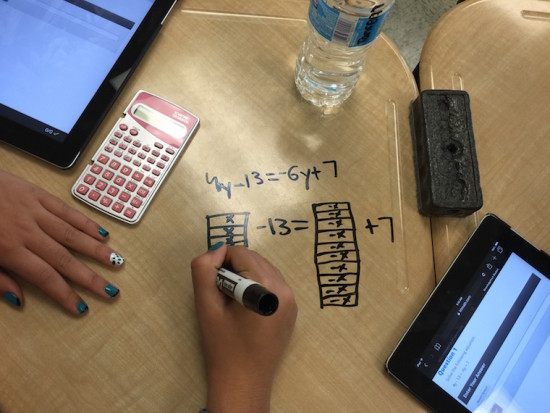 The practice was in the form of another Knowledgehook Custom Gameshow and you can check out the questions here: 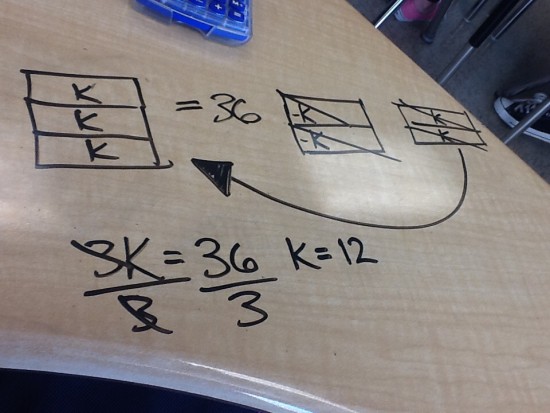 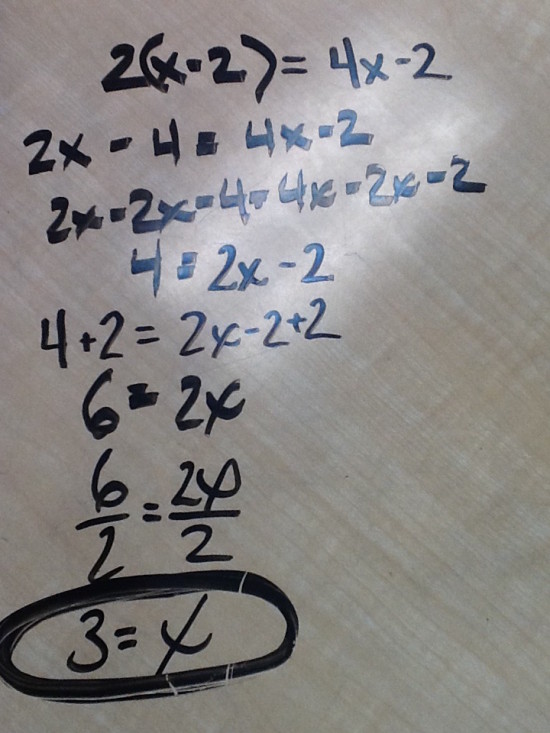 Today I was super stoked to get students working on a Desmos Activity I created using the new Activity Builder feature. Really, this activity is simply the activity builder version of my Representations of Linear Relations Math Learning Journey I had created by sort of hacking up a workflow using Desmos shared links. Something that originally took me a couple hours to do now took me about 40 minutes to put together. I should note that I typically overthink things when I create them. Who knows, maybe a more efficient lesson planner would take a fraction of that time. Either way, I was saddened when I clearly missed the memo that classes would be shortened for the school pep rally that was to take place later in the day. DOH!

My original plan was to start with a couple warm up equations to extend our work from the previous day, then shift gears into the Desmos Activity. With my 75 minute period shortened down to 50 minutes, I knew it wasn’t going to be possible to get through the whole activity. My instant audible was to do the warm-up questions and then give students a few more equation challenges to take them to the end of the class.

Here’s the equations warm-up I had created in Knowledgehook Custom Gameshow:

So that’s it for this week. Next week, we’ll start the week off with the Desmos Representations of Linear Relations Activity with a supply teacher taking the reign for the entire week as I head to Norway to meet with teachers from Ontario, Alberta (including John Scammel!) and Norway for the NORCAN Project!

Have a great weekend and an even better next week!