Yesterday was our first class after the Ontario weeklong March Break. I had plenty of time while travelling to reflect on what new approaches were working and what areas I needed to work on. Most recently, I have been trying to focus on making math tasks contextual, visual and concrete while also modelling the interconnectedness of topics throughout my course. My largest struggle is trying to break away from a very structured approach that really left no room for differentiating my lesson based on where the students were.

With the overarching learning goal focusing on the Distributive Property both with and without unknowns, I thought starting with a warm-up at the whiteboards was a good place to begin.

“Chunk” 9 x 12 Using an Area Model Without a Calculator

Students were first instructed to chunk 9 x 12 into “friendly” numbers to assist them in multiplying without the use of a calculator. Students had participated in some practice on the first day of the year with chunking their multiplication into friendly numbers in hopes that it would set them up nicely when we began introducing variables.

Something to note is that I wanted to start with really manageable numbers and with this group, many are not comfortable with their multiplication tables.

I then had students chunk 6 x 14 using the same method and all succeeded without much trouble.

In order to very slowly introduce the concept of a variable, we demonstrated what this could look like using the 6 x 14 problem:

Students then had their first problem to simplify with an unknown, 5(x + 6):

As students simplified this problem, I couldn’t help but think to myself that this had to be boring. While I tried to help students see that this type of problem called “distribution” is just like chunking our multiplication, I felt less than inspired having my students do problems for the sake of doing them.

While we haven’t really done too much with solving equations, I thought that maybe making this more of a challenge to find a missing number could be more intrinsically motivating. I then tossed this up on the board:

I was surprised by how dedicated to finding the missing number my students became. It is important to note here that I did not give them ANY instructions, steps, rules, or algorithms to solve an equation.

Students were able to very quickly simplify using a visual model from 9(x + 5) to 9x + 45, but then many were stuck. The only clarification I would give when students were stuck were variations of the following:

Can we determine what 9x is equal to?

Show me what part of your visual model represents 99…

After some thinking and collaboration amongst students in the class, we were able to look at quite a few different solutions that all focused more on logic and reasoning rather than an algorithm: 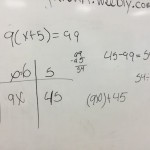 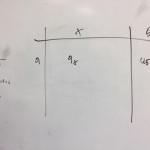 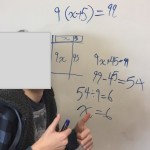 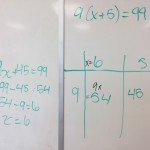 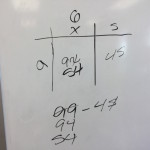 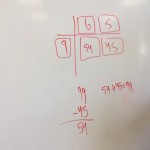 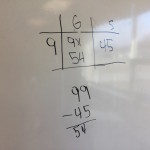 Extending to Multiplying a Monomial by a Monomial

We have done some work with Pythagorean Theorem using Dan Meyer’s Taco Cart as well as some visuals I’ve created along the way, so students are familiar with the geometric and visual representation of “squaring” a number. I was interested to see if anyone could make the connection to multiplying monomials:

This question stumped some students at first, but we had a quick discussion about what it means to multiply a number by itself and many were then off to the races. This question also allowed us to highlight some common misconceptions including the thought that 12x^2 is equal to 144x or 144x^2. 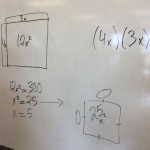 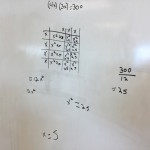 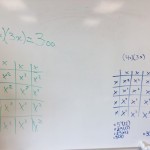 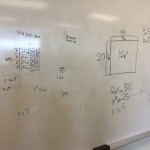 Students ASKED to be Challenged!

After this problem, I was thinking we’d move on to what I had planned. However, students were asking me to give them another to try and it became sort of a friendly competition. I was very surprised by this, but thrilled none the less. The next problem for them to solve was:

My original intent was to use an animation to get my students thinking and engaged. As it turns out, it wasn’t really required. However, I did want to consolidate some of what we did today, so I thought I would introduce this question:

Students began working on the perimeter and I changed my approach to have them SOLVE for the unknown length of the pool noodle by giving them the total perimeter of 180 feet.

Overall, I was really impressed with how far we went in this lesson. I had no intention of attacking solving equations, but the opportunity presented itself and I’m glad that I went with it. Clearly, students (and I) got more value from this lesson by letting the learner lead their own learning. I’m hoping to build on this idea and share out the results.