Thank you for joining me for some math geekery at the Whittier California EdTechTeam Summit! Please feel free to utilize the resources related to the day below for your future use. As always, please don’t hesitate to reach out in the future!

During the first session of the morning, we discussed more strategies to spark curiosity in order to promote inquiry and productive struggle.

The task we focused on during this session was the Counting Candies 3 Act Math Task:

After introducing the task, we also added a Desmos Custom Activity to the mix:

Before jumping into the task, we discussed the two groups of students I (unintentionally) created in my class and the possible commonalities between students in both groups.

We also spent some time discussing the problem with rushing to the algorithm and used the Keurig Instant Coffee Maker commercial as a prime example of the rush to the algorithm.

The task explored during this session was the Stacking Paper 3 Act Math Task:

Keep in mind that you might consider using Google Sites as an option to deliver this task:

You can also read a blog post about creating interactive tasks with Google Sites here:

I shared a Google Doc with a couple additional options as well such as Desmos Custom Activity Builder, Knowledgehook Gameshow, Recap! and GoFormative.

I then shared my vision for mathematics education that I have been refining for the past five years. Here is what it looks like currently: 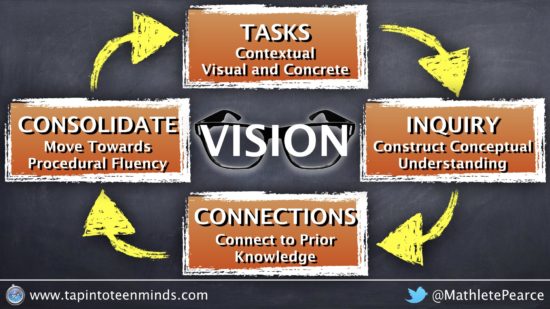 We then jumped into a 3 act math task called “Walk Out“:

After introducing the initial video and giving some time for you to notice and wonder, we soon added in a digital tool called Knowledgehook Gameshow to make the process interactive. As I mentioned in the session, I would spend time without any digital tool when introducing 3 act math tasks in your classroom to build a community of mathematical thinkers and discourse.

We also explored how we can use Explain Everything and Desmos to make Interactive Math Learning Journeys:

Another Desmos Activity we explored was Marbleslides: Lines.

Note that they have other Marbleslides versions including:

Other Useful Math Tasks and Tools:

The Stacking Paper Tasks are also available on iOS as a multi-touch book for iBooks: 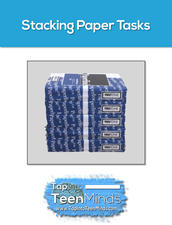 Learn more about what’s inside the multi-touch book here.

Or, consider accessing these tasks in an interactive way via Google Sites.

Access over 30 tasks with all resources downloaded directly to your iOS Device to avoid streaming media in your classroom through the Curious Math iTunes U Course: 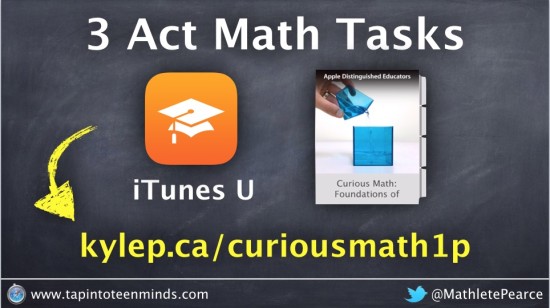 Other interesting Desmos Activities to Explore:

Will It Hit The Hoop? – Dan Meyer 3 Act Math Task
Try as a student: Desmos Activity (Code: nax6)
Use this activity with your own class by clicking here.

Other Useful Courses to Check Out:

OR, you don’t want to download Jon’s Beautiful Functions book? Check out all of the links here on his blog.