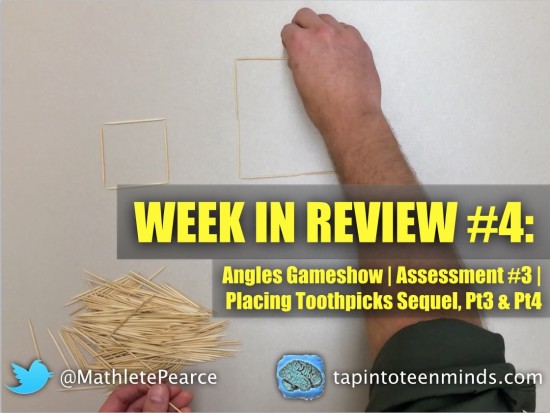 I can’t believe the fourth week of school has already come and gone. This week was a bit hectic as I was away on Tuesday and Wednesday engaging in professional development as a part of my role as Middle Years Collaborative Inquiry (MYCI) Lead for my district and again on Thursday delivering a keynote for the Carleton Ottawa Mathematics Association (COMA) in Ottawa, Ontario. With me out of the classroom for three days in a row, that leaves the majority of this week a “self-directed” experience for my students. Here’s the recap:

The day before I know I will be out of the classroom is always a struggle for me. I am always a bit too excited to do too much on a regular day, so knowing I’ll be gone leaves me wanting to do way too much to compensate for the lost time. Either way, I wanted to use this class to give students a bit more exposure to some of the Geometry of Angles topics we had introduced in the previous class.

The warm-up was a Knowledgehook Custom Gameshow to get students thinking as well as some spaced practice. Here’s the three questions they did:

I know, I know… the warm-up questions aren’t breathtaking. However, I do feel that my students need some practice working with the new skills we cover, so I try to make it as enjoyable and collaborative as possible via Knowledgehook Gameshow.

Next, I wanted to get my students to begin extending their thinking about patterning from direct variation linear relations to partial variation, where the y-intercept is not equal to zero. We did this by introducing the Placing Toothpicks Part 3 task. 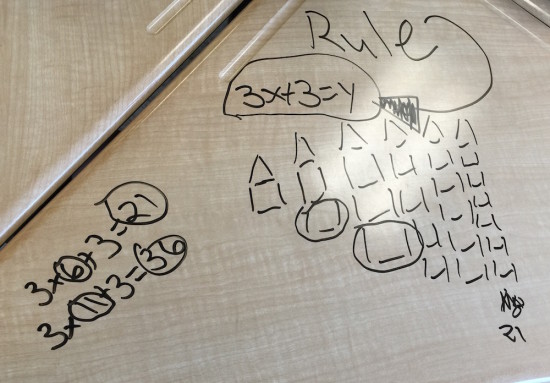 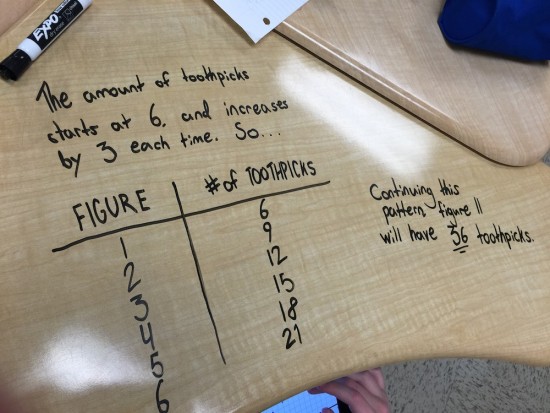 After sharing out some interesting approaches and discussing a general rule in words and using algebra, we moved on to the final challenge of the day called Railing Reproduction (will share task online soon). Students watch a short video clip of some railings on a stairway and are asked “What’s the question?”

In this case, I make up a short story about how Paisley, the Bull-Puggle gets pretty worked up and put her tubby body through the railing. I only had one angle to work with and had to find the other missing angles prior to making my cuts with the saw.

Students worked diligently on this problem and it was clear that they had been able to recall some of what they learned back in grade 7 math. From what I’m seeing with this group, I should be able to jump into interior and exterior angles of n-sided polygons from an inquiry standpoint without much trouble.

On the assessment for this week, students will be tackling portions of the following learning goals:

You’ll notice I said we will tacking “portions” of those learning goals. This is because I decided to use specific curriculum expectations for my standards based grading approach due to the huge number of learning goals that ballooned last year when I broke them all down. I think somewhere in the middle between how I’m doing it this year and how I did it last year is probably the best bet. Maybe identifying the specific expectation with learning goals as sub-categories of that. More thinking to be done with that one.

Here’s the assessment, if you want to snag it:

As mentioned earlier, I was away today and always struggle to create a meaningful learning environment that will be easy enough for a substitute teacher to lead and beneficial to the students. In a spiralled classroom, you’ll see us jumping around from strand to strand quite a bit and constantly introducing new concepts as we go. Days when the teacher is not present might not be the best way to introduce new concepts because it is hard to determine how many students are putting in their usual effort.

When I am away delivering or receiving professional development, the lesson will typically involve a few tasks students can handle independently or collaboratively with their table groups with a realistic timeline of finishing prior to the end of the period. My instructions to the supply teacher will be explaining the tasks and the protocol in which students can tackle the tasks, followed by the opportunity for students to re-address learning goals from their gamified learning log like this sample learning log and/or they can complete some practice problems from Knowledgehook Homework that I am experimenting with this year.

The first task is called Snowy Winters, where the following situation is laid out for students:

The last snow storm lasted 6 hours. Over that time, the amount of snowfall was measured hourly, except for at the 5th hour when Mr. Pearce watched the 3rd period of the Toronto Maple Leaf game. 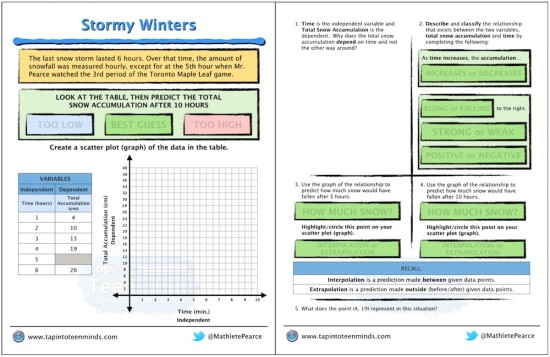 Student are then asked to create a scatter plot, line of best fit, make some predictions using interpolation and extrapolation based on the data, and classify the relationship. I know, I know… not the most interactive or creative task you’ve ever seen. It’ll have to do while I’m away.

Then, I had attempted to make a semi-interactive task that continues the Placing Toothpicks tasks (original and part 3) that students had worked on over the past week and a half called: Placing Toothpicks Part 4 (original, eh?). I had taken the sequel task and actually saved to use it for tomorrow as a way to introduce identifying linear and non-linear relations. Maybe I should just re-name all the tasks? Ah well.

The Part 4 Task is another partial variation linear relation pattern that is formed using a design with toothpicks.

Students are going to be looking at the 6th and 11th figures as they did in previous tasks, however they will be going through this task in a self-led fashion by downloading a math task template I created for them:

How I made the task template interactive was by adding hyperlinks in the PDF that will allow students to jump straight to the Act 1 video:

After students have come to their conclusions, they can watch the Act 3 video by clicking the link embedded in the math task template:

The task template is structurally organized to ask students to do specific things like create a table, graph and answer some questions on the back. I’m not super thrilled with using this approach as of late, but these math task templates are really the only structure from my former, more traditional, teaching approach. I would be lying if I said I don’t worry about my moving to a less structured teaching style, but I feel deep inside that it is the right thing to do.

If you want to grab the template, click below:

This would be the third day in a row that I’m out of the classroom. Luckily, I’ve had the same supply teacher who is actually the long-term occasional teacher that teaches my afternoon schedule while I do Middle Years Collaborative Inquiry (MYCI) work for the district. While there is some consistency while I’m away, this is the first time he has covered the group. I asked him to keep me posted on how things were going while I was away and it sounded like most students are on pace, but there was a school-wide interruption planned to take up a portion of the period today.

With that in mind, I left a new topic (identifying linear and non-linear relations) for students to explore with the thinking that we would be spiralling back to it a number of times throughout the semester. This would give students the opportunity to construct their own understanding of what makes a relation linear or not through an investigation. This is where the Placing Toothpicks Sequel comes in as it is quadratic. I was interested to see how students reacted to it, since they have only seen linear patterns for the most part thus far.

Again, I thought I would create an interactive math task template that would allow students to link directly to the videos independently: 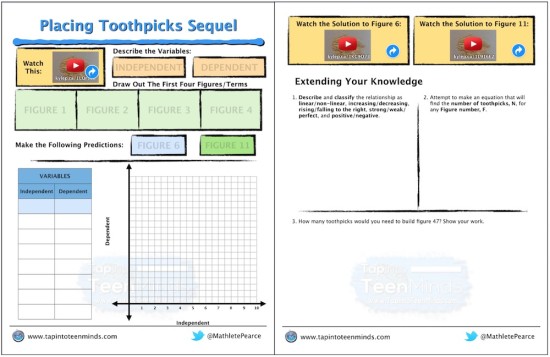 Students were not in school today as teachers had a scheduled professional development day.

That’s it for this week! Looking forward to being back in action next week as we spiral into our next few topics. Toss me some feedback on what you’re seeing. Any ideas how I can release more of the responsibility to my students? On my mind for this coming week is how I can better “let go” of the formal structures (i.e.: procedures) that most of our learning goals tend to lead to. Until then, have an awesome week of learning.