Investigation: Going for a Jog
Video discussing the mind buster problem from our section on Direct Variation:

Describe the shape of the graph.
Where does it intersect the vertical axis?

Write an equation to find the distance,  d, in metres, that Susan jogs in t mins.

Use the equation to determine the  distance that Susan can jog in 25 mins.

What Is Direct Variation?

A Direct Variation is a relationship between two variables in which one variable is a constant multiple of the other variable.

A video discussing the following related to Direct Variation:

In the following video, Mr. Pearce and the class discuss a question from the homework. This was recorded the next day at the beginning of class with the help of the students. The question asks:

The cost of oranges varies directly with the total mass bought. 2 kg of oranges costs $4.50.

a) Describe the relationship in words.
b) Write an equation relating the cost and the mass of the oranges. What does the constant of variation represent?
c) What is the cost of 30 kg of oranges?

What Is Partial Variation?

A video discussing the following related to Partial Variation:

This video was recorded at the beginning of class. Mr. Pearce and the class take up a question from the previous day to summarize Partial Variation and discuss why the relationships involved in the question are Partial and not Direct variation. The question is:

This video was recorded during a lesson. Students were asked to work with their table groups to answer the following: 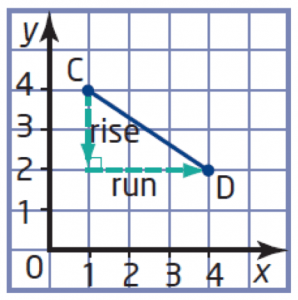 Consider the graph of line segment AB to the right.

Can you find the coordinates of 2 other points on the line?

Sec. 4.4 – Slope as a Rate of Change – Interpreting Slope of a Line

This video focuses on Slope as a Rate of Change for a linear system of equations. In this case, the question is as follows:

The distance-time graph shows two cars that are travelling at the same time.

This video demonstrates How First Differences in a Table of Values Can Identify Linearity of a Relationship by comparing two relationships from a table of values. The question from the video asks:

Each table shows the speed of a skydiver before the parachute opens. Without graphing, determine whether the relation is linear or non-linear.

Today, students had a discussion about the four representations of a linear relationship; a description, table, graph and equation. From this, students took a table to determine the type of variation, the slope/rate of change/constant of variation, initial value and a description to match. They then created an equation in y = mx + b form to summarize their understanding.