Learn About Ratios, Rates & How to Solve Proportions 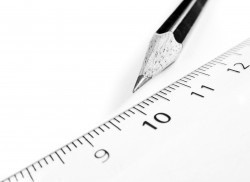 Minute Math Help Video – What Is a Ratio and a Rate?

Learn about the difference between a ratio and a rate as well as how to represent them in lowest terms.

Video Transcription:
A ratio is a comparison of two or more quantities with the same unit. An example of this would be four (4) boys to every six (6) girls in a math class. Since we are comparing people to people, that makes the comparison a ratio. A rate is a comparison of two or more quantities with different units. An example of this would be a car that consumes 20 Litres of gas for every 200 kilometres it travels. Since we are comparing litres to kilometres, we have two quantities with different units and thus the comparison is a rate. Lastly, we will quickly demonstrate how you can reduce or show these comparisons in lowest terms. In the first case, 4 to 6 (4:6), we can divide both numbers by two (2) leaving us with a ratio in lowest terms, 2 to 3 (2:3). In the second case, we can divide both quantities by 20, leaving us with a rate in lowest terms of 1 to 10 (1:10).

Learn how to set up a proportion of ratios or rates by deconstructing a word problem and organizing your thoughts on paper.

Video Transcription:
Welcome to Minute Math – where we do math in a minute or less on Tap Into Teen Minds dot com. In this video, we will determine how many calories are in a small bag of Doritos? Taking a look over here, we know the weight of the bag (78 g), we also note the serving size (28 g), as well as calories in a serving (140 calories). Since the number of calories in a serving is proportional to the number of calories in a bag, we will set up a proportion. We will set up a proportion comparing the rate of calories to the weight per serving and the rate of calories to the bag to the weight of the bag. Going back to the question, we will sub in all of the given information. Since we do not know how many calories are in the whole bag, we will use the variable ‘x’. In the next video, we will learn how to solve a proportion.

Learn how to solve a proportion of ratios or rates using the traditional method of division in order to determine how many times bigger one ratio/rate is than the other in the proportion.

Learn how to solve a proportion of ratios or rates using a trick called “Y-Thingy-Thingy” that gives you a short-cut to the answer, assuming you have your proportion set up correctly. It is always important to understand a mathematical concept before using a short-cut or trick!

Video Transcription:
In our last video, we had solved the following proportion using a traditional method (division), so now I will show you a trick that can be used as a short-cut when solving any proportion. Looking at any proportion, we take the two numbers across from each other on the diagonal and multiply them, while dividing the left-over number. You’ll notice that by drawing a line connecting the two numbers diagonally as well as a line to the third number, it will look like a “Y.” This method will always give you the same answer, regardless of how the proportion is set up.