Get Students On Task And Engaged With Whiteboards

If you are a long time reader of my blog, you’ve probably noticed many in-class pictures involve students writing on desks with erasable markers. Other times, you’ll see students standing at whiteboards working collaboratively on problems in small groups. Despite the fact that using erasable markers and non-permanent surfaces definitely keeps things lively, I didn’t introduce white-boarding just to mix things up. This approach is actually based on research by Peter Liljedahl in his paper Building Thinking Classrooms. His research showed that students who completed math tasks on non-permanent surfaces like chalkboards or white boards and in particular, when students were standing in a vertical position, improvements in 7 of the 8 measures than when compared against students working on more permanent writing surfaces like chart paper or notebooks. 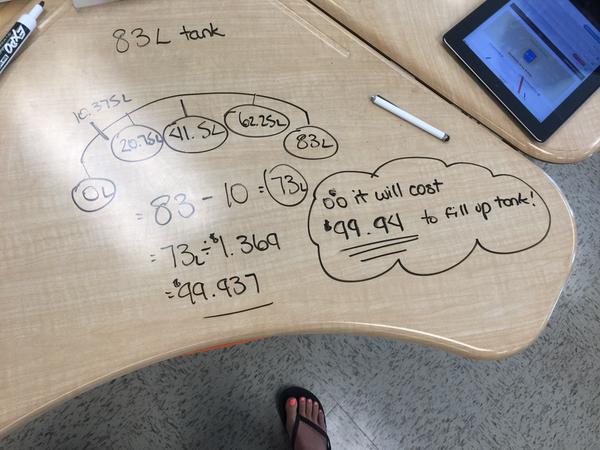 A hypothesis suggests that when you write on paper, even if with a non-permanent writing utensil like a pencil, students psychologically feel like what they write is permanent. This can have the effect of making students feel as though they should be able to determine a direct path to the answer without doing any sort of brainstorming or strategizing on the page. Sadly, I’m sure that the many years of me demanding that my students line up their work neatly by lining up the equal-sign in a straight vertical line with a clear and concise therefore statement at the end probably fuelled this pitch for perfect. While I had thought I was helping train students to become better mathematicians, I realize now that I was actually hindering them from developing their mathematical mind by fogging it with anxiety and a false fear of failure.

For those of you who have been with me for over five years, you’ll remember when I used to run a completely paperless math classroom with a class set of iPads. Wow! That was a long time ago. While I thought having students use their finger or a stylus to write on a PDF annotation app like GoodNotes 4 or Notability would promote brainstorming, conjecturing and making mistakes before crafting a final solution, what I found was the same issue that Peter Liljedahl found with permanent surfaces like paper. Students appeared to treat the iPad – which makes it very easy to erase while working in an annotation app – as a permanent surface. My only conclusion is that students were aware that their work completed on the iPad would be saved and uploaded to a shared folder in the cloud, whereas when students are writing on a non-permanent surface, they know that their work will have to be erased at the end of class for the next group of students. Even if they were to take photos of their work for safe keeping, it was as though the non-permanent surface allowed them to work much more freely and a little more messy which allowed them to engage in the problem-solving process more deeply.

Although I never collected data like Peter Liljedahl, my own personal observations and conversations with students showed that students stayed on task much longer when working collaboratively at white boards or even standing at the desk working on horizontal non-permanent surfaces in small groups. I’m not alone on this vertical non-permanent surface (VNPS) journey; be sure to check out some of the many other math teachers who are engaging their students with VNPS including Alex Overwijk, Laura Wheeler, Jon Orr, Nathan Kraft, Graham Fletcher, Mark Stamp and many more.

Now that my job has taken me out of the classroom into more of a facilitator and presenter role, I’m constantly going into different spaces to work with teachers and engage in math learning. The downside is that I usually don’t know exactly what the room setup is going to be like. I often don’t know until I arrive whether there will be chalkboards, white boards or other surfaces for my participants to get up and do some math learning on. While I would typically bring a few pads of chart paper and sticky tack, tape and tacks to provide some “permanent” surfaces to write on, more creative folks like Alex Overwijk and Jimmy Pai bring a stack of laminated chart paper on the road with them to use as a portable non-permanent surface solution. I’ll be honest and say I’m not that creative (and maybe a bit lazy?), but I’ve stumbled across a product that helps folks like me. Toby and the team from Wipebook based in Ottawa, Ontario, Canada have got us covered! Wipebook specializes in non-permanent surface products including non-permanent surface charts that can be reused and are quite easy to take with me in the back of my car.

Recently, Jon Orr and I took Wipebook Chart Packs on the road with us to some conferences and district presentations and they worked great! In a breakout session we held at The OAME Leadership Conference in 2017, we had a room of over 100 teachers, consultants, and coaches up at the walls doing a math problem with us. It was fantastic!

We had so many participants asking for more details on how to get their own Wipebook Chart Packs that they are now offering an exclusive Educator Starter Pack: 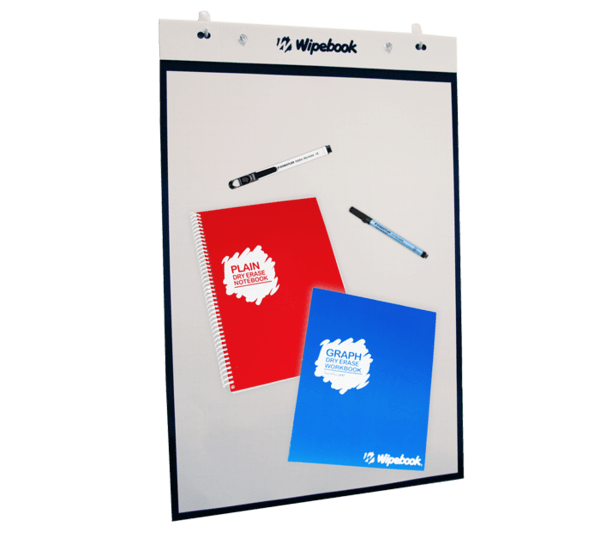 Buy in the U.S.
Buy in Canada

You can grab the starter pack for 25% off the list price.

Interested? Grab the starter pack by clicking here for Canadian addresses and click here for addresses outside of Canada.

The great folks at Wipebook were generous enough to give you this great discount and they have offered to give Jon and I a small percentage of every sale without any additional cost to you. WIN-WIN!

Are you using vertical non-permanent surfaces in your classroom?

If so, what kind are they? A traditional chalkboard? Whiteboards? Or have you ripped up your own?

Have more questions about how you might go about getting your students in the vertical and non-permanent world?

Let us know in the comments below!

← The Complete Guide to Spiralling Your Math Curriculum Memorization vs. Automaticity: Back to Basics or Beyond the Basics? →